Richard is rather perplexed when it comes to the activities in the House on the Hill garden, so has firmly delegated the “green chapters” of the blog to me.

I need to start by stating that the two tractors we now own are my pride and joy and much to Richard’s upset, will have an outbuilding just for themselves, thereby taking up valuable car space. We inherited the 16 hp Roper from the people from whom we bought the house, they having inherited it from the previous owners. The proprietor of the local tractor repair shop told us he has been servicing it for more than 40 years. At the last service it required several parts of its body bolted down to the frame, as all the hard work required of it whilst we have been clearing woodland debris and transporting large logs have taken its toll. The Roper is of no use for cutting grass, so one of the first things we had to do after buying the property was to purchase a lawn tractor. Looking back over some notes I made in March 2013, I was taking it all quite seriously:

“The garden is changing each day, with snowdrops growing all over the grounds and a few primroses giving some yellow colour in the garden off the kitchen. Hundreds of daffodils have poked their green stems and leaves through grass and earth. It will be a sea of yellow later this month. Elliot will be starting to look after the garden this weekend, weather and tools permitting. That’s what I should be doing right this minute: ordering sundry Spear & Jackson hand tools to be picked up before Saturday. Elliot has very helpfully sent me a spreadsheet of everything he thinks we will need to keep the garden under control. I have started doing some research about sit-ons. Who would have thought there could be so many options to keeping grass short and neat? To mulch or to pick up, two wheels or four for the cutting plate (four!), back plate, reverse pedal or hand control (definitely reverse pedal) and the question of the location of the emergency cut off switch?!?”

So many options and so many decisions. We ended up getting a Kabota 2350 with the mulching option on the grass cutting plate. Such a lovely machine with a staggering 23hp and it even has a drinks holder (very necessary as it takes nearly six hours to mow all the grass in one go) and a 12v socket so that phones or ipods can be charged. 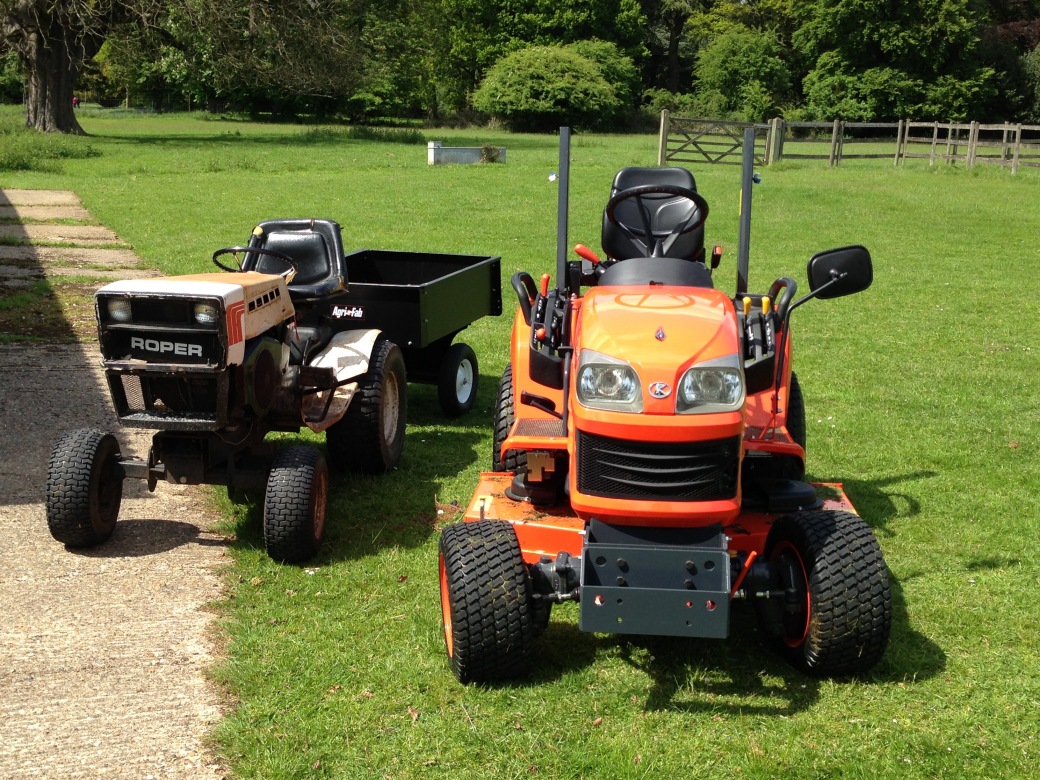 Richard could not help himself when confronted with two tractors. He ended up racing me down the drive. I was driving the Roper with a trailer attached and had no chance against the Kabota. Richard even video’d the “race” and happily declared himself the winner. I rather cruelly suggested it was the only motor race he had won in the past year……

Prior to buying the house, we viewed the gardens either before the main growing season or well after when everything had gone to sleep for the winter and the grounds were lying dormant. We knew there was a lot of grass to be cut, but when we completed on the purchase in February 2013, we had absolutely no idea what would be popping out of the ground, sprouting on bushes and growing on trees during the next three seasons. We weren’t even sure what each tree was!

Those of you who have known us for some years, must be wondering why we would have wanted a large garden. I can’t keep houseplants alive for more than a few weeks and I am always hugely relieved when flowers are given to me already fully arranged. However, the House on the Hill does not have many areas of pretty, high maintenance planting. Instead and in keeping with the surrounding National Trust land, the garden is mainly laid to lawn with a lot of beautiful large oak, beech and chestnut trees, as well as some fine silver birches. There were two paddocks that were used by large herds of deer as a cut through on their twice daily circuit. There were several huge rhododendron beds, which the deer ignored. 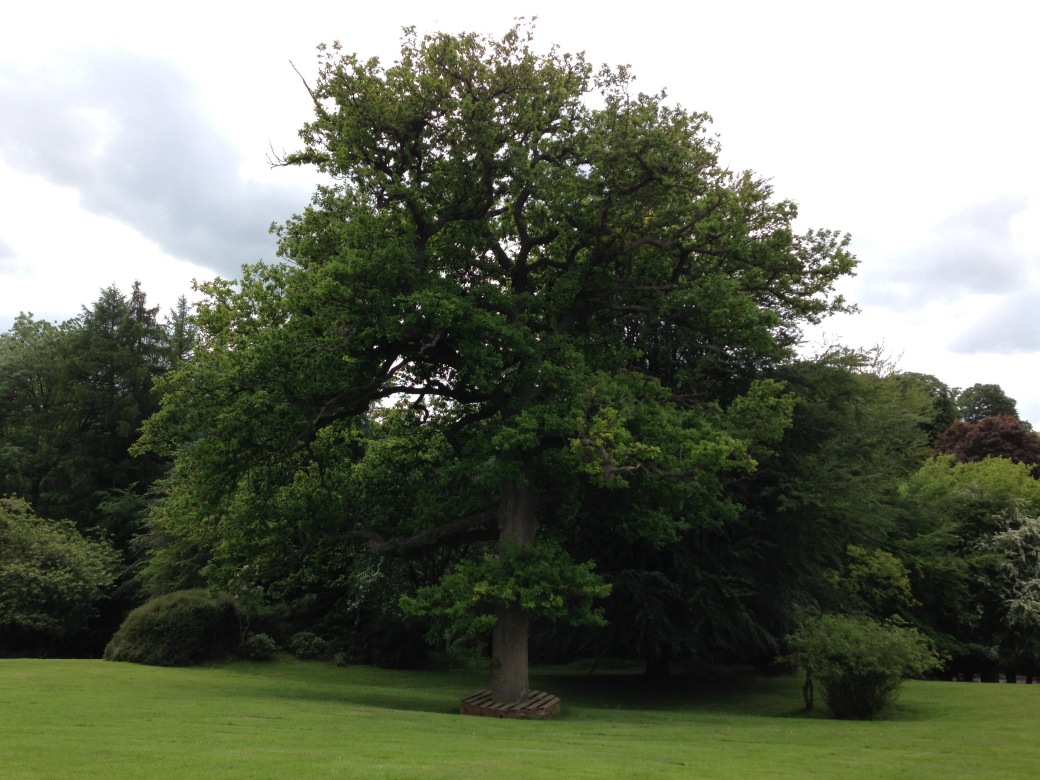 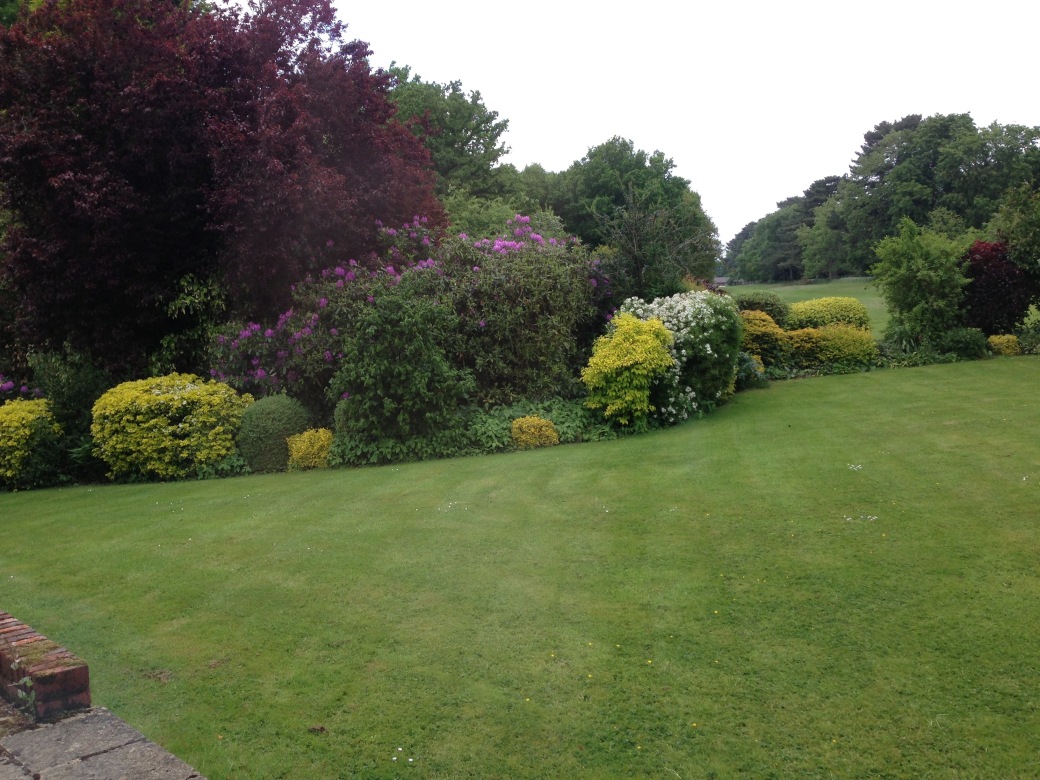 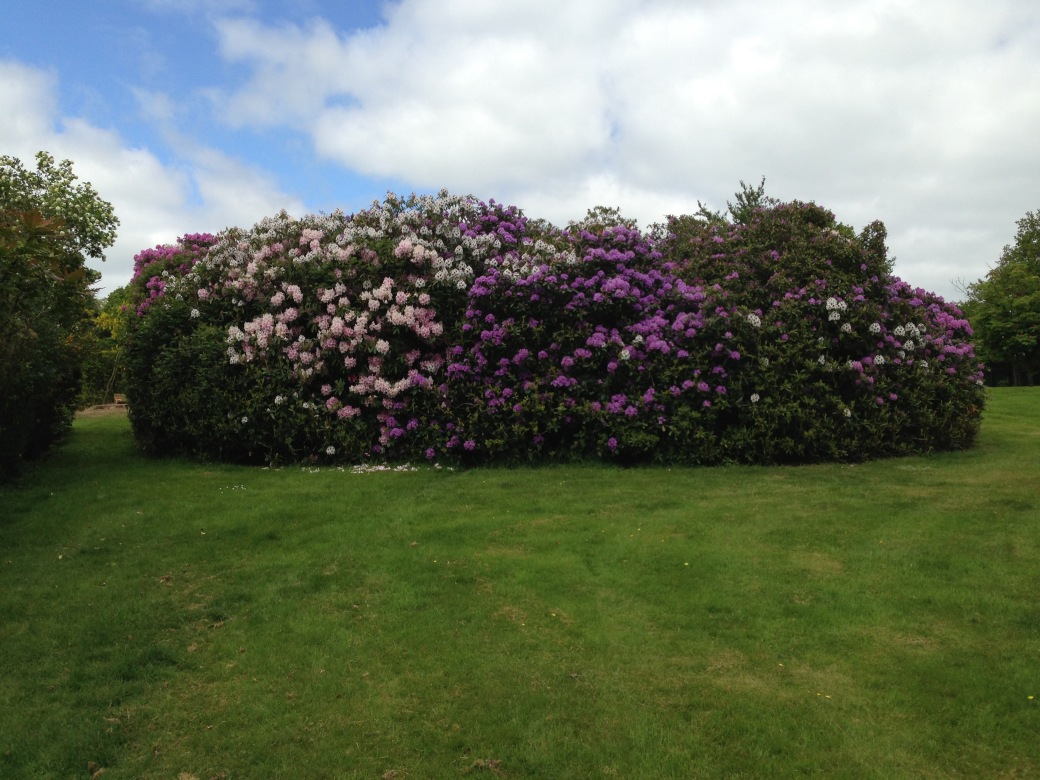 But the true gem was a vegetable garden and a very small orchard. I had been quite successful in growing mustard and cress when I was about eight years old, but had barely been able to keep basil alive on the kitchen windowsill since then. What were the chances that I could grow vegetable and fruit, fit for the table? Only one way of finding out…

So I spread compost over the existing vegetable bed and dug the soil and started planting various seeds: turnips, beetroots, parsnips, radishes, potatoes, carrots, leeks, runner beans, red chard, courgettes and even sweetcorn. And then I waited to see what would happen, if anything. I had also cut down a whole load of canes shortly after taking over the property but I wasn’t sure what I had cut down nor whether I was meant to and indeed whether what I had cut would eventually be edible.

Incredibly, EVERYTHING started to grow and what was really fun, was that I had no idea what would happen next. I followed instructions from the local garden centre and various vegetable growing manuals and in time I had an amazingly bountiful harvest of turnips (never again – no one liked those), leeks, runner beans and red chard. As well as ruby red beetroots, peppery radishes and flavoursome potatoes. I even got four ears of corn. And the canes turned out to be both summer and late fruiting raspberries. The carrots were pathetic and I am not bothering with those again. Depending on how you look at things, the courgettes were the biggest success. They grew like weeds and of course some of them ended up as huge marrows. We had so many courgettes that apart from eating them steamed, fried, in soups, in ratatouille and curries the family even endured a courgette lasagna. Eventually there was mutiny in the ranks with our daughters refusing to eat any more, no matter how I disguised their presence in the dish. Two seasons later they are only just coming back to eating them, which is fortunate as there are currently 16 plants in full flower with beautiful yellow and green edible gems about to ripen.

As for the rest of the fruit, we had loads of rhubarb and I have since planted more and the trees in the orchard turned out to be dessert apples and plum. There were two further huge apple trees that were good for cooking and in 2013 we had so many apples that I gave half of them to a local farmer who made juice from them and in return I got some 20 bottles of pressed apple juice. There were also another three plum trees in the garden and for the past two seasons they have been laden with fruit. We even have several grape vines that have given us enough sweet, but pip filled fruits, to make 20 jars of grape jelly each year. This has turned out to be a wonderful alternative to redcurrant jelly and of course delicious with peanut butter, a combination that we became very fond of whilst living in the US.

It’s all very well growing vegetables and picking the fruit, but the real issue is what to do with it as it all ripens at the same time? How much stewed fruit can you actually get through without unfortunate consequences, how many runner beans can you face after a month of eating them at every main meal? Even friends started to dread those bags of “goodies” that I started to offload to anyone who was foolish enough to say they would like some of our produce. The smell of freshly picked turnips in a plastic carrier bag was unforgettably off putting.

So I started blanching, freezing, pickling and preserving. In the first year I made over 150 jars of jams, jellies, pickles and chutneys. These made lovely Christmas presents. Little did friends and family know that this is all they will be getting for years to come! 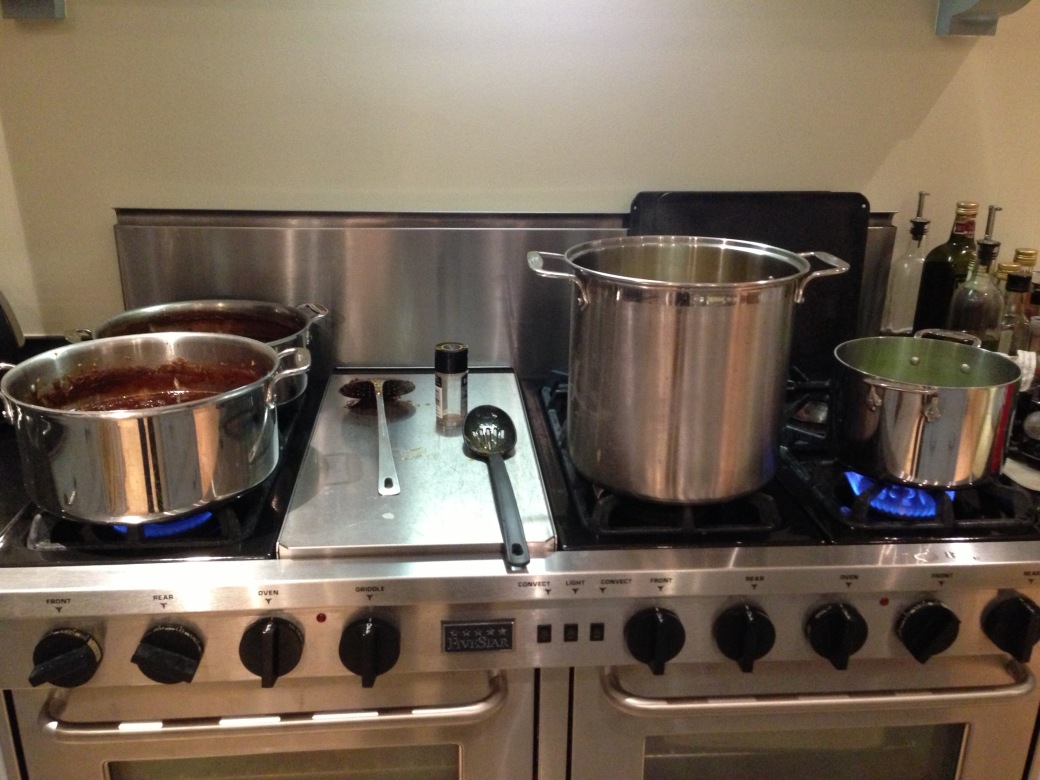 By the end of 2013 our little allotment at the House on the Hill had become a wonderfully relaxing hobby. Richard and the children were calling it an obsession, but little did they know what I was planning next…

3 thoughts on “The Good Life”