I guess we’re not quite recreating greek mythology, but after so long in the planning and demolition, it did seem somewhat like a long told myth that something would rise again on our hallowed site, and if not a phoenix, a building would do.

I’m not going to go into a lot of technical talk here about construction materials and practices, however we may do that at the end of the blog.  I’m quite keen myself to know what we’ve used in the build, how much it all weighs and so on.

The house is principally built from breeze blocks, bricks, concrete, timber and a little bit of steel just to hold it all together.

You’ve already seen the tonnes of concrete poured into the foundations.

The ground and first floors are also constructed from concrete, but this time 150mm hollow core concrete slabs, craned into place.  This obviously creates very solid floors and is ideal for the large spans that we have in the house with a pretty open plan design on the ground floor. The fitment was quite a skilled affair, with a bunch of specialists from the sub-contractor spending less than a day on each floor, lifting the slabs in and making them fit. I was very impressed with how quickly and smoothly all this was done and not remotely worried.  I commented on this at one point to the foreman, who quickly told me that this was the first time they had used this flooring technique on a family home, rather than an industrial unit!  That’ll teach me to ask questions.  Best to leave it to Karin, who actually knows what is going on….. 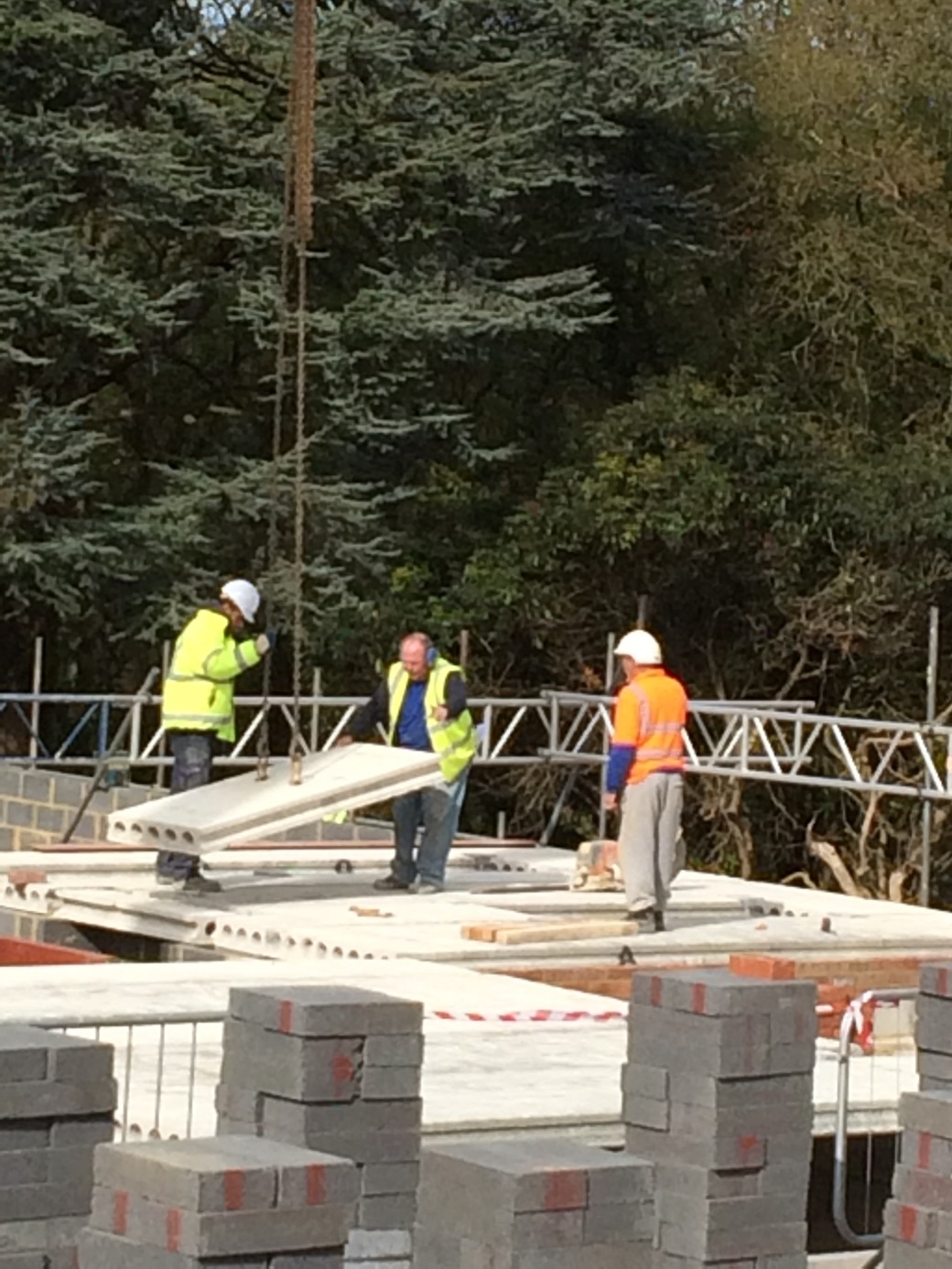 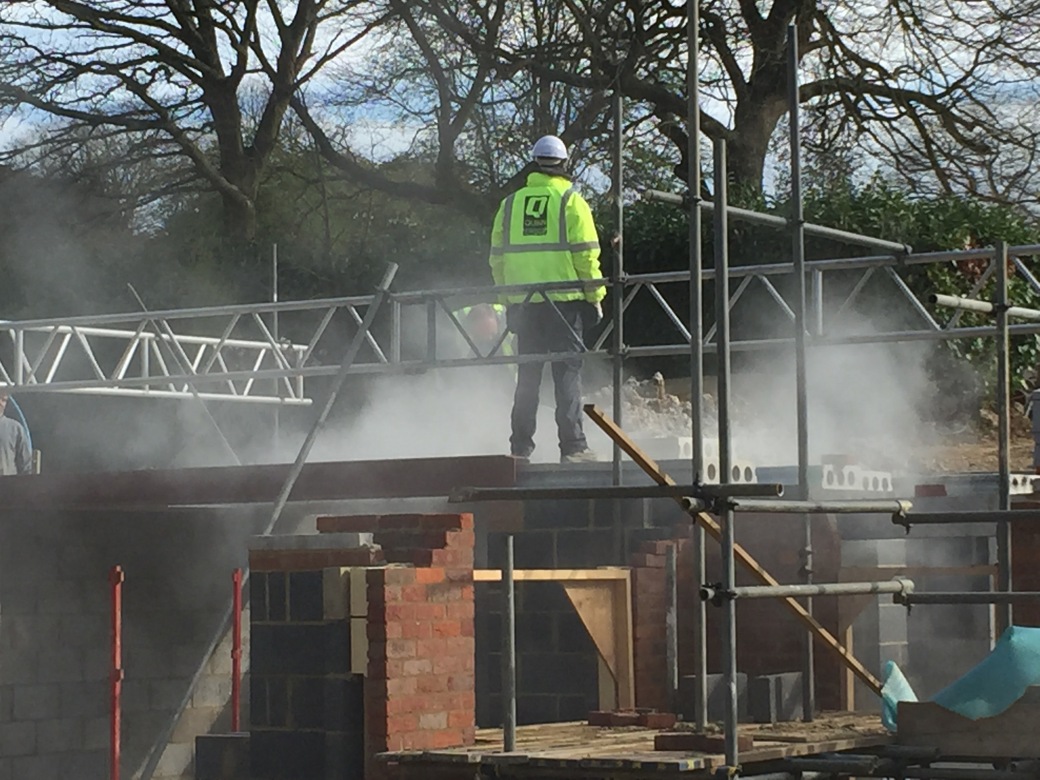 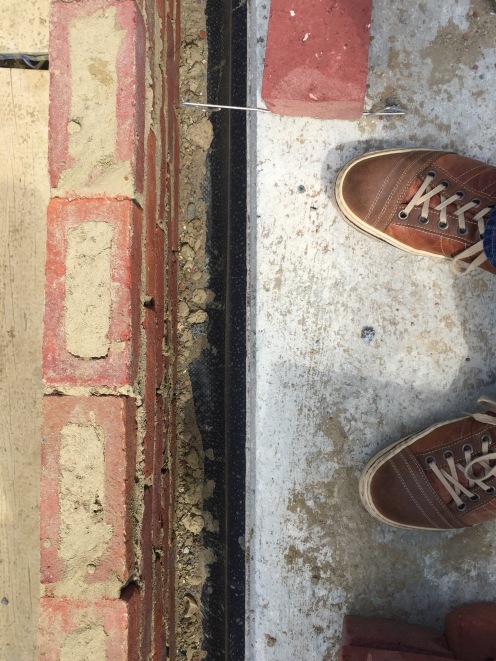 The staircases to the basement and first floor are also fashioned from concrete.  Built off site, and craned into place but unfortunately we were on holiday when this happened so have no video or photos of it. Clever and quick though, with pins embedded in the concrete just enabling the whole staircase to be picked up easily and dropped into place.

We certainly can’t forget the faithful and noble breeze block.  Light, cheap, quick, effective and at the core of so many buildings.  Luckily, none will be visible once the house is finished, but I’m delighted to have it there standing solid, strong and silent behind the scenes, making sure everything works and stays together and letting the facing bricks look good and get all the credit.  I was about to write that there are similarities to our marriage there, but thought better of it…… 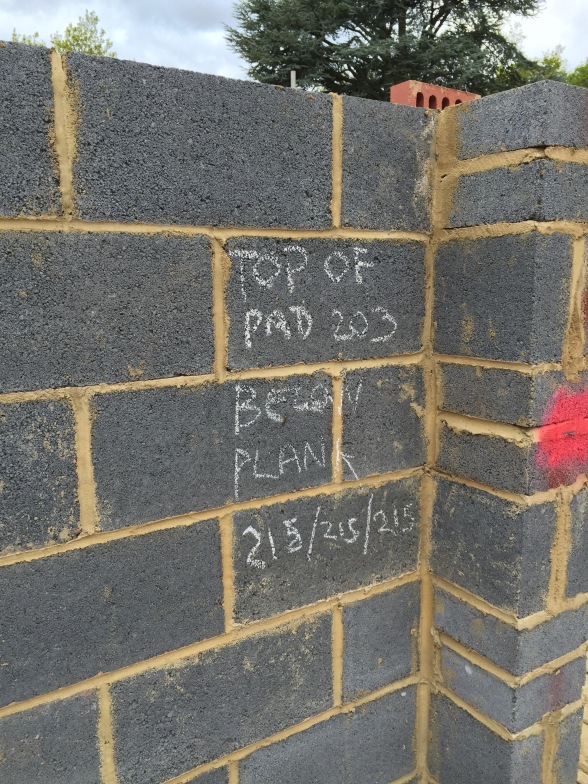 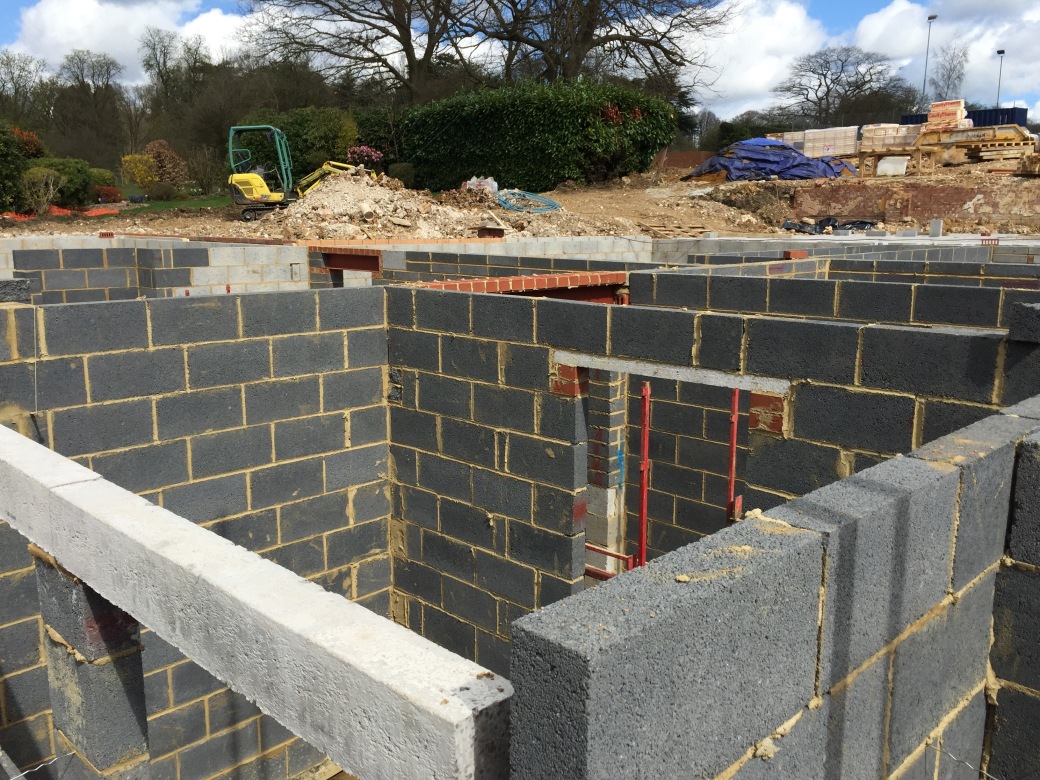 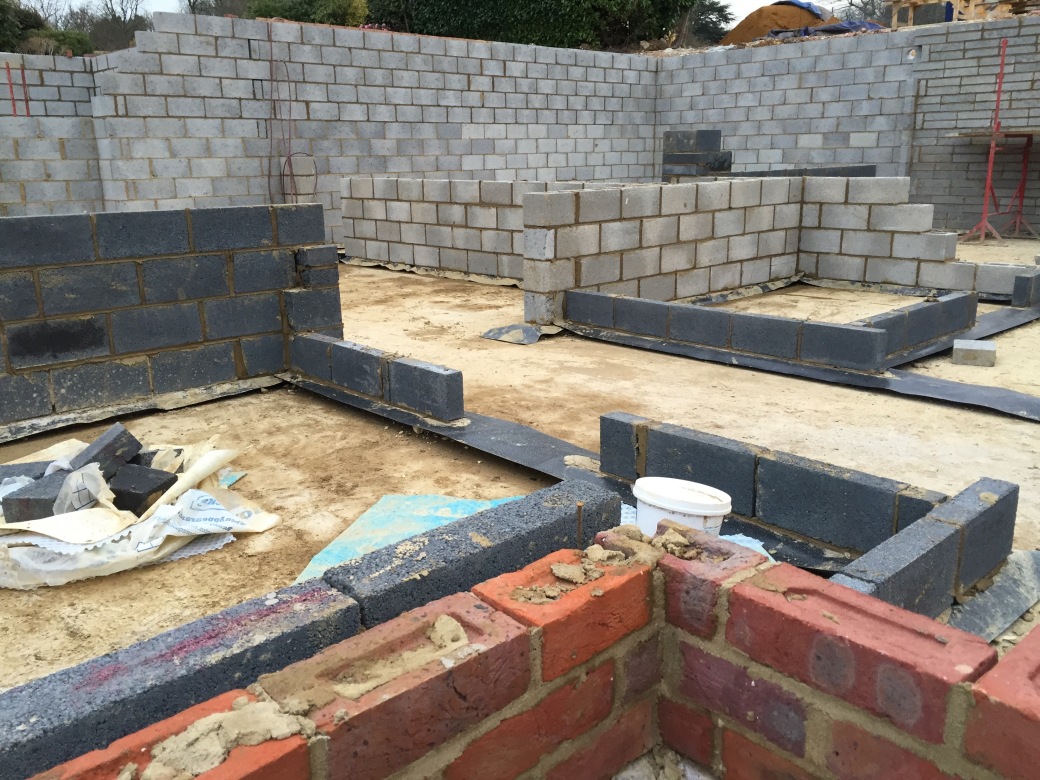 Which brings me to the bricks.  The planners requested that we use local brick, and we were very keen to do so as bricks made from locally mined clay do much to root a house in its landscape. Often hard to see it specifically, but there is something about the colours and the tones of local materials that just work. I had never thought much about the humble house brick, but when you have to choose, and price, the main construction material for your house, the subject suddenly becomes a little more of interest.  I’ve read a lot about it, and won’t bore you here.  Just worth pointing out, bricks are something else “the Romans did for us!”. If you’re interested, have a look here.  Fascinating!  http://www.brickdirectory.co.uk/html/brick_history.html

So Karin, in her usual thorough and determined way, got stuck in and started researching brick manufacturers, and techniques, grilling poor unsuspecting employees at brick works all over the South East!  We finally chose Bovingdon Bricks, located in the Chilterns and Hertfordshire’s sole surviving brick maker. They have made bricks from locally sourced clay since the 1920’s, mined from a sustainable site. Each brick is hand thrown then fired in a Scotch kiln. The different colours are then blended by hand, and Karin chose “bottom of the kiln, mid-range-multi” bricks.  Two small walls of bricks were built up from different manufacturers to see what they looked like when used in action.  Karin had two sets to choose from.

I chose the wrong one.  Was quickly put straight and off we went!

I must admit, all Karin’s research and effort paid off and the hand made bricks, with the brushed pointing, really looks good and just right. 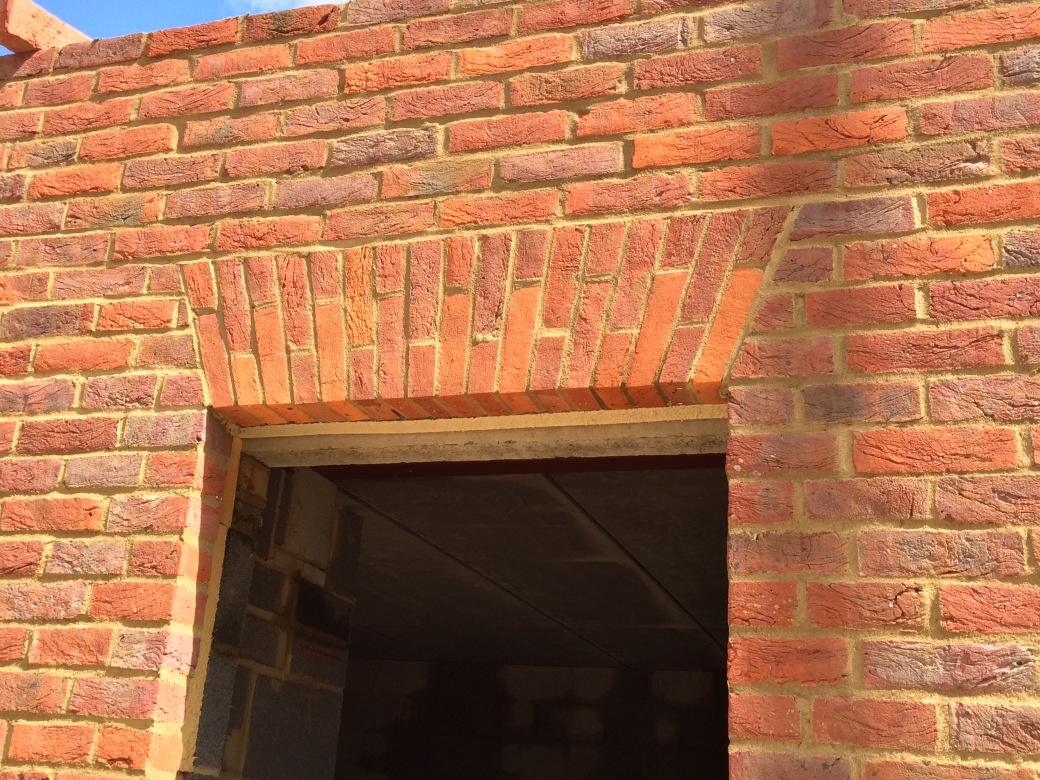 The other key component at this stage of the build is the insulation.  We aren’t going for a completely sealed house, but are looking for very high levels of thermal efficiency for all the obvious reasons. So we are using a lot, and I mean a LOT, of Cavitytherm’s 100mm Xtratherm cavity fill insulation.

None of this would have been possible without that other stalwart of building, scaffolding.  In spite of using most of the scaffold pipes in Hertfordshire as far as I can tell. it was all quite elegant. 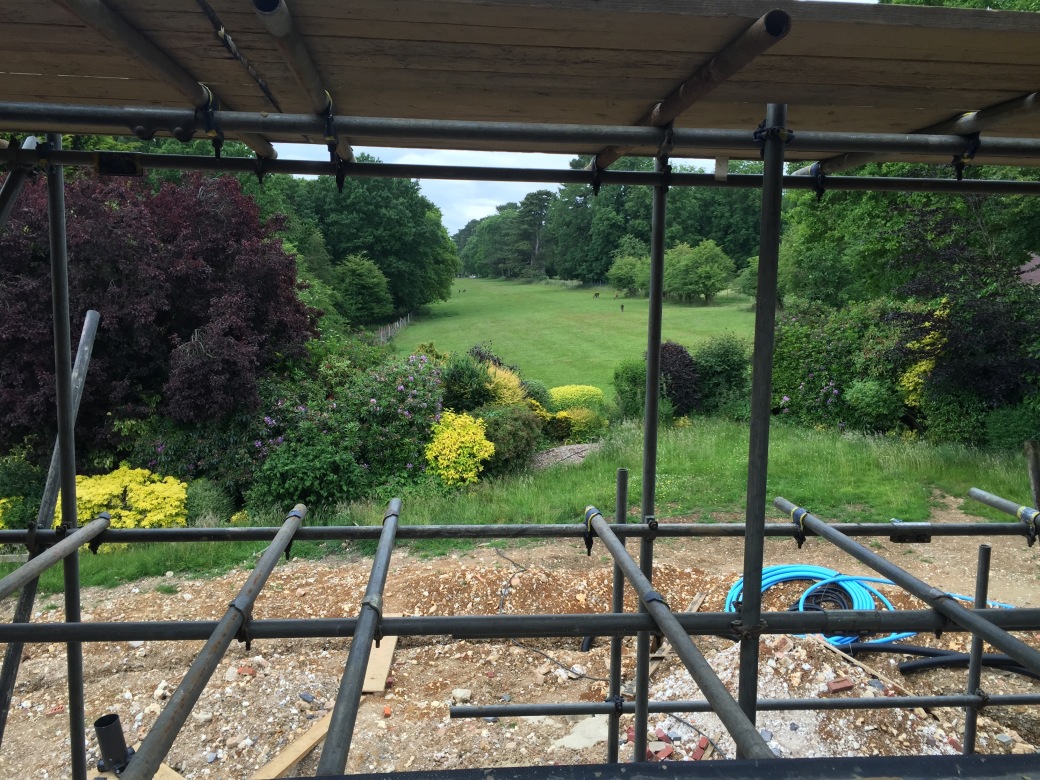 So those are the details.  Karin understands it all a lot more than me.  All I know, is that by 30 June, our new home was really starting to take shape and we were 41% complete.  The phoenix is well and truly in flight…

6 thoughts on “April to June; The Phoenix….”